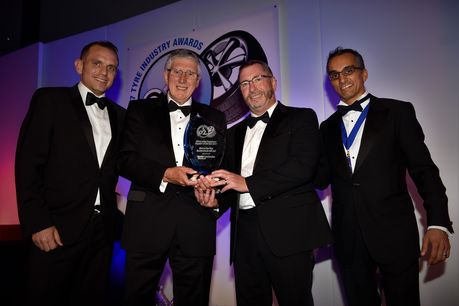 The major national tyre industry event held at the Double Tree by Hilton in Milton Keynes was another fantastic evening. The host at this year’s proceedings was BBC sports broadcaster John Inverdale alongside NTDA Chief Executive Stefan Hay. For REMA TIP TOP it was to be the fourth successive year that the company have won this prestigious award.

REMA TIP TOP, Group CEO, Mark Insley expressed his pride in receiving the coveted NTDA award. Mr Insley stated, “Every year serving this fantastic industry presents incredible challenges and opportunities - in a market that demands a flexibility to adapt to ever changing economic conditions, competition and technology. We have a fantastic team who understand this at REMA TIP TOP and furthermore an environment to work in which everyone can express their skills and creativity. We work closely with our customers and suppliers on a daily-basis, building great working partnerships and providing mutual value added benefits and expertise”.

On a notable evening, REMA TIP TOP Managing Director - Cliff Jones, also received an honorary NTDA life membership award and the NTDA Chairman’s award. Cliff was delighted to receive both awards, stating: “The automotive aftermarket has been a huge part of my life and after 49 years in the trade it is naturally a great privilege to receive these awards by the NTDA at their annual dinner”.

Everyone at REMA TIP TOP would like to take the opportunity to thank all of its customers, suppliers and the team for another fantastic and award winning year serving the UK automotive aftermarket!